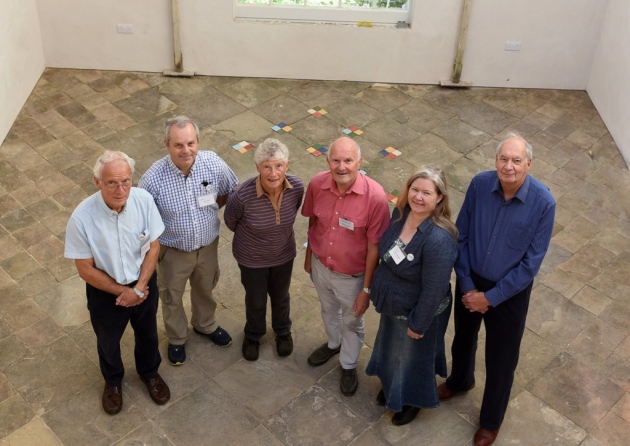 After notification by the Heritage Lottery Fund in April 2017 of the award of funding for the Wisbech General Cemetery Project, a lease to the Wisbech Society for the 30-year period required by HLF from Fenland District Council, the current owners of the Cemetery and Chapel, was finalised and agreed by HLF in September 2017.

Planning Permission and Listed Building consent for the Grade 2 listed Chapel, subject to some conditions, had been obtained during the Development Stage. Contractor, North Cambs Developments Ltd., was appointed in December 2017 with a start date of 3rd January 2018 and a completion date of late summer 2018.

Preliminary work by tree surgeons to trim the trees that had overgrown the Chapel over several decades was carried out in September, after the nesting season had ended, permitting more natural light to penetrate the canopy.

Work on site commenced as scheduled with the careful uplifting to storage of the original sandstone slabs and tiles, 170 years since they were laid.

At the same time ducts to carry the new electrical supply cable, telephone and broadband connection and wastewater pipe were installed in a trench alongside the entrance footpath, Lambert’s Walk.

On a very rainy day between Christmas and New Year, the plants were dug up and stored by a team of Society members and Friends who later reinstated them. Scaffolding to both the inside and outside of the Chapel was erected and building work to construct a new roof commenced. The severe winter conditions slowed the work but since the spring, good progress has been made.

At the time of writing this update in September 2018, the works to construct the new slate roof, with its very successful roof light running most of the length of the building, have been completed.  At the same time the high level guttering and stonework repairs were carried out to allow the internal and external scaffolding to be dismantled.

The new wooden framed windows and doors have been installed and glazed including the spectacular fusion glass decoration to the two sliding sash windows designed and made by Carrie Anne Funnell at her Wisbech Studio. The hardwood doors and frame, made to match the original shown on a Samuel Smith photograph, have been manufactured in March and fitted in the original opening. This all means that the building is now weather tight for the first time for over 40 years.

Internally the walls to form the accessible toilet and the kitchenette have been built incorporating the mezzanine storage area above. All the walls have now been plastered.

The first fix electricals and plumbing are complete and second fixing has commenced.

The original York stone floor slabs are being relaid and will incorporate the original pattern of small corner tiles which were originally of slate. These have been missing for many years so the children of Peckover School have come to the rescue by designing and making small coloured clay tiles, fired in the kiln at Thomas Clarkson School, to replace them. This successfully solves a problem and provides a very attractive and interesting feature.

All the works are being overseen by the Architects, Brand Associates and to the approval of the FDC Conservation Officer.

In parallel with the construction programme, a great deal of time and progress has been achieved with many of the other project activities including:

Further project news and Heritage Lottery Fund comments will be released early in May, along with the opportunity for photographs and interviews. For further information about the National Lottery grant and Wisbech General Cemetery contact David Crouch on treasurer@wisbech.society.co.uk or Paul E Eden, Wisbech Society Press Officer, on publicity@wisbech.society.co.uk