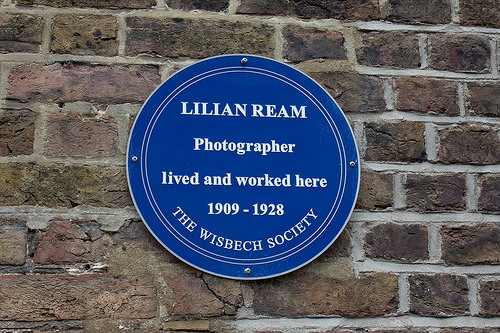 Trustees of the Wisbech Society attended the unveiling ceremony of a blue plaque in honour of Lilian Ream at 4 The Crescent. The photographer lived and worked at these premises between 1909 and 1928. Born in 1877, she had started her photographic career at the age of 17.

Remarkably, for a woman at the time, she gained an apprenticeship with photographer Alfred Drysdale. This was the site of her first studio.

Lilian Ream's work was notable for her photographic record of the working and leisure time of the citizens of Wisbech, and the backdrop of the town.

The Society was delighted to commemorate the importance of Lillian Ream's contribution to Wisbech. The unveiling was performed by Michael Theobald and Dorothy Papworth, who between them have given around half a century of service as Trustees.