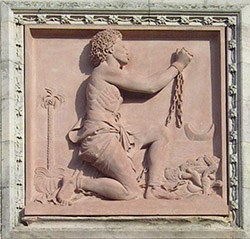 The iconic Clarkson Memorial in the centre of Wisbech honours the anti-slavery campaigning work of one of Wisbech's most famous sons, Thomas Clarkson. The memorial features a stone plaque on each of its four sides.

This new Supplicant plaque has replaced the original panel which had become badly eroded. The work was commissioned in 2007 by Fenland District Council, and was undertaken by leading sculptor Corin Johnson, whose previous work includes a memorial to Princess Diana.

The plaque depicts a slave in manacle and chains and bears the inscription "remember them that are in bonds".

Wisbech Society contributed £20,000 to the £45,000 total cost of the restoration of the memorial, and Chairman Brian Payne ceremonially handed a cheque to David Oliver of Fenland District Council.

Councillor Oliver said "Corin has produced a magnificent piece of work that rounds off our restoration of the memorial to one of Wisbech's greatest sons. It will be much admired for many years to come."